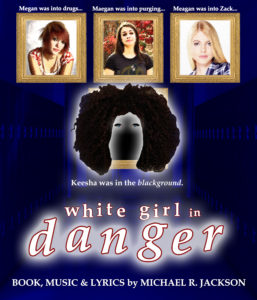 Many years ago, as a joke (where so many of my ideas come from) I started to imagine a musical based on the lives of the white girls in 90s era Lifetime TV and NBC Moment of Truth movies. While not a hardcore devotee of these films, they were definitely present in my childhood and were like supplementary reading for a class on camp that I took at the University of Queerness while I majored in daytime soap operas, which were always my main focus.

I even came up with a theme song that just had one lyric:

“White girl in danger! She’s doing drugs but she won’t do her homework! She’s acting vague and she won’t answer questions! Oh Lord!”

I would sing the little tune I came up with to myself over and over again when it struck me over the years.

Even though I didn’t know why at the time, I knew that lyric was meant to be sung by a black woman who in my mind looked and sounded like a mix of Nell Carter and Marla Gibbs as depicted on the the 80’s sitcoms “Gimme A Break” and “227.”

I had not yet come to a real consciousness around my blackness and therefore was unable to connect certain dots.

But the years would pass and I would come to consciousness. Painful realities about white supremacy, racism, and marginalization revealed themselves to me.

On the musical theater writing path I was on, I began to notice things.

I noticed the dearth of stories with black characters driving the narrative for sure, but I also noticed what shows would be like when black characters were either driving the narrative or present in the story in some other capacity. I noticed what their music usually sounded like and how it was used to connect with audiences (read: watered down gospel style music being belted to thrill audiences). I pondered why black characters (and particularly black female characters) seemed to live in such a cage. When Motormouth Maybelle from Hairspray sings “I Know Where I’ve Been” where has she  been really? What was her history as a black woman in Baltimore? What does she look like without a blonde wig on her head and how does she feel about whatever hair is underneath?

Outside the storytelling, I noticed conversations about “diversity” in musical theater popping up everywhere. I wrote my own take linked here:

In the piece, I address a number of topics but landed on the conclusion that best way to address what we term diversity is to just tell the truth. For me, that means centering stories around people of color–black people in particular and black women even more in particular and allowing them to exist in the world in a kaleidoscopic complexity in scene and song. For me that means thinking about how music features these characters and what relationship the songs they sing have to the audiences that gaze upon them and how we see and hear the lives of these bodies brought to the foreground. For me, it goes without saying that despite who the majority of musical ticket buyers are, I am not primarily concerned with how white audiences want to consume black stories or characters. I believe there is a way to tell black stories for black audiences without excluding non-black audiences from being able to participate, engage, or empathize. It is foundational part of my mission statement to create work that is as challenging as it is accessible.

As the landscape began to change, I started to think about the roles for black women in television. In 2012 we were introduced to Washington D.C. “fixer” Olivia Pope as played by Bring It On star Kerry Washington on the Shonda Rhimes ABC hit Scandal. In 2014, we met troubled attorney Annalise Keating as played by Broadway vet Viola Davis on Shonda Rhimes executive produced How To Get Away With Murder. Prior to that we’d been seeing Lieutenant Anita Van Buren on the flagship crime drama Law & Order as played by S. Epatha Merkerson and Medical Examiner Melinda Warner on Law & Order: SVU as played by Tamara Tunie who for many years also played attorney Jessica Griffin on the daytime soap opera As The World Turns.

As I began to actually work on the musical version of White Girl In Danger, my mind turned back to the Lifetime TV and NBC Moment of Truth movies from the 90s and early 2000s. I noticed that black women were never the protagonists of these films. I noticed that when black women were in these films they usually only had under five lives or single scenes and of that, their roles were always to aid the story of beleaguered white women. I started to think about the mammy stereotype and all the ways it might have stayed with us and evolved into as all the very professional black women judges, district attorneys, medical examiners, and fixers that popped up everywhere from a scene on One Life To Live (google Judge Fitzwater and see what you find) to a black woman character pursuing and being pursued by two powerful white men over several seasons (one of whom is an assassin and one of whom is the President of the United States) on the highest rated show in Shondaland. What if all of these “powerful” black women were the same black woman? What effect could  all of that power have on a black female body and psyche?

I also noticed the real life narratives of white women self-victimizing themselves throughout history and into the present day. There was Carolyn Bryant lying about Emmett Till assaulting her and having her white femininity avenged and leading to his brutal death. There was Susan Smith who drowned her young sons and tried to frame two non-existent black men for the murders in order to start a relationship with a wealthy man who did not want to be encumbered by children (how’s that for a Lifetime TV plot?). And in the more politicized BlackLivesMatter era, there was Officer Betty Shelby, who shot unarmed Terrence Crutcher and claimed in a dramatic video how terrified she was of him and feared for her life. There are so many white girls/women in danger in American culture. We fixate on them in real life and in the stories we consume and share with each other.

But in America and in the world at large there are even more victimized black women we know little or nothing about. For every lying Carolyn Bryant, there is an actual black girl or woman who has been sexually assaulted or murdered by a white man who was either never reported on or was reported on and not prosecuted or punished. There are staggering statistics about missing/murdered/abused black girls and women who never make it into the same media space as a Natalie Holloway, Elizabeth Smart, or Jon Benet Ramsey (whose 1994 murder is still a subject of lore and fascination over twenty years later). Why is that? The easy answer is of course, white supremacy but as a writer, I am not satisfied by easy answers, especially for a subject (and subjects: black women) I believe deserves undivided attention, love, and intervention.

To be clear, I am a cis, able-bodied, black, queer man and there is an extent to which none of this is my business but the contradictions in all of this have haunted me for years now and the artist in me set out to explore.

With all of this in mind, I have been working on White Girl In Danger which is a dark musical comedy about Keesha Gibbs, an African-American teen who lives in the “blackground” of an all white world of a 90s era melodrama and seeks to prove she’s just as much of a protagonist/heroine as Meagan, Maegan, and Megan, the white girls who battle issues such as drugs, alcohol, abusive boyfriends, eating disorders, and finally a serial killer who has been murdering the town’s white girls one by one. It’s inspired by classic 90s movies-of-the-week such as “She Cried No,” “Friends ‘Til The End,” and “Mother, May I Sleep With Danger?” And of course, real life.

There are two upcoming opportunities to see a work in progress concert version of it this month. One will be on Sunday September 24th at 3pm at Adelphi University in Long Island as part of the Jonathan Larson Legacy concert series that I was invited to participate in as a 2017 Jonathan Larson Grant Recipient. The second concert will be the very next day at Joe’s Pub at 9:30pm as part of the Musical Theatre Factory’s 2017-2018 season kickoff. I am excited to share where I am with the piece at the moment and work with direction by the incredible Tamilla Woodard,  Music Direction by Darius Smith, arrangements/orchestrations by Adam Wiggins, and a cast which includes: LaToya Edwards, LaDonna Burns, Molly Hager, Bonnie Milligan, Christiana Cole, Liz Lark Brown, Eric William Morris, Sarita Lilly, Rheaume Crenshaw, and Larry Hamilton.

I hope to see you at one or both of these performances. If you can’t make the Joe’s Pub date but can make the Adelphi date, don’t let the train to Adelphi deter you as it’s a very easy train ride to Long Island and then shuttle buses from the train station and back scheduled for ease of commuting to the city.

Link for Adelphi here. Use code MRJ10 for a discounted $10 ticket.

Hope to see you there!