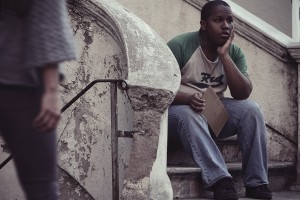 I don’t know jack about romantic relationships. I’m 32 years old and I’ve never been in one so obviously I feel like a freak of nature everyday of my life, but even more so on Valentine’s Day. The words “you gotta put yourself out there, man” are permanently tattooed on the inside of my eyelids when I go to sleep at night. When friends ask me “are you seeing anyone?” I become immediately defensive because the answer has never been “yes.” At my yearly physical, my doctor always asks: “why aren’t you dating?” One year I challenged him on this by asking him out. He said no. For this and other reasons, my experience of being a single person is different than most. I’m not just in between men wondering which one better fits the feng shui of my beach house. I am a single man. The fact that I am a single gay man even further magnifies the feeling of being a freak of nature.

I had the recent unfortunate experience of being at the most hallowed of gay white male institutions: Sunday brunch, where after several mimosas, we ended up casually chatting over our grindrs about which guys messaged us, which guys we messaged, who we met at [insert name of gay bar here], and how much they ejaculated on us once we got them home. I of course, lied as I always do, about the breadth of my experiences so that I could feel like I fit in. Since that brunch, I’ve left grindr. Since that brunch, I’ve retreated even further into my version of singlehood because I can no longer even pretend I’m “that” gay guy because I’m not. And when I do pretend, I’m perpetrating a fraud of the highest order. The truth is I’m “this” kind of gay guy: I watch a lot of dissatisfying white gay porn. I eat ALL of the time. Most Saturday nights you will find me at home drinking red wine while manically updating my Facebook status with some obscure youtube clip I found of say, a 1983 episode of the now defunct soap opera Guiding Light like this one (so good!)

I had originally planned to post this rumination a few months ago in response to this post by blogger Rich Juzwiak because it serves as another example of the funhouse mirror I look into and feel so alienated by when I think of myself dating, sleeping around, and/or being a “successful” gay man in a relationship (even one that is unhealthy or temporary). People who know me think that I’m pretty crazy. I am pretty crazy. I’m totally weird. But I also have very simple needs. And that might actually be the weirdest thing about me. I just want to be with someone who likes loves likes loves and respects me, and whom I like love and respect in return. Over the past year, my therapist (whom I affectionately call The White Woman though not to her face) and I have determined that I don’t trust anyone. When I say I don’t trust anyone, I don’t mean that I actively distrust anyone. It just means that historically, I have been someone who has only ever relied upon himself for his own emotional needs. While this has kept me safe, it has also kept me isolated. In this way, you could think of me as an autistically high functioning lonely person.

“You gotta put yourself out there, man.” I know. But I also know that I have a friend who now lives in the Bay area where he and his fiancée are planning a wedding and subsequent life together. Before they moved, I watched him propose to the fiancée on a rooftop in Brooklyn and was completely overwhelmed and broken in two by the simplicity and the ease of their love for one another—the way in which it was so obvious to them that they should be together and that if they should ever be apart, they would be well adjusted enough to be apart and know with certainty that they could find happiness with other people. Neither of them ever experienced the chronic low grade panic that lives in the pit of my stomach that I will never get over my fear of rejection, my hatred of my body, my closet vanity, my daddy issues, my mommy issues, my self-protectiveness, my sexual inexperience, and just be a person “who needs peopllllllllle … people who need peopllllllllle …” who accepts himself as he is and trusts that someone else could do the same and not just trusts it, but seeks it out again and again as necessary until he finds and claims it as his own.

I have only recently come to the conclusion that I am not a piece of shit. And so I recognize that it’s baby steps toward whatever romantic destiny may (or may not!) lie before me. I can only hope that I am able to sustain the bravery to keep moving forward once I finally decide I’m ready to move beyond the womb of my closed heart.